*****Location will differ depending on the camp. Please see camp specific details for further information and directions*****

Home to the Eastern League’s Richmond Flying Squirrels, The Diamond, which also served as home for the Atlanta Braves Triple-A affiliate for 23 years, has long been recognized as one of the premier parks on the East Coast.

Operated by the Richmond Metropolitan Authority and leased by the Rams, The Diamond has a seating capacity of 9,560.  The ballpark not only offers fans a spectacular view from anywhere in the stadium, but also comes complete with a full-service 150-seat restaurant overlooking the playing field, modern concession facilities and more than 15 superboxes for corporate and private entertaining.

The Diamond is equipped with a spacious press box for working media as well as radio and television booths.  Photographer and television bays are also available at field level.

The stadium has also provided the Black and Gold with one of the best home-field advantages in all of college baseball.  Since the beginning of the 1998 season, the Rams have compiled an impressive 258-95 record in home games, a winning percentage of nearly 75 percent.  VCU has also won at least 20 games at The Diamond in seven of the past 11 seasons.  The Rams set a school record with 22 straight home victories spanning the end of the 2000 season through the start of the 2001 campaign.

FACTS ABOUT THE DIAMOND 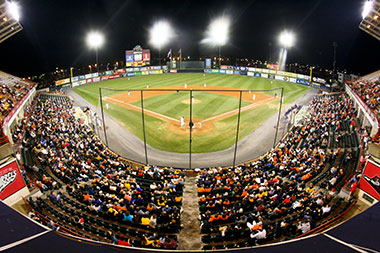